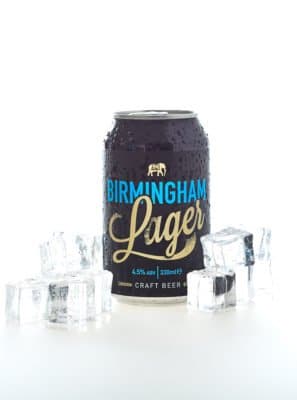 My business depends on being able to demonstrate a return on investment for my clients. Its hard to link great photography with increased sales in a short timeframe, but one thing that does carry weight is social media exposure. How to go viral on Twitter is a question that all commercial photographers could be thinking about.

Here's the story. In August I ran a survey gathering marketing information. I offered an incentive to take part; a chance to get a free photoshoot.  There were three shoots available and one of the winners was local Birmingham company, The Indian Brewery.

They sent over a couple of bottles of ale and some cans of lager. I'd mentioned to them that I wanted to shoot the lager with water droplets to make it look as though it just came out of the fridge. We'd had a long spell of hot weather and although it was over, I figured the picture would come in useful next year.

The setup was created in the studio. I used acrylic ice cubes and sprayed the water onto the can of lager. It was lit with a single light behind and to the left and the fill was provided by a white flag bouncing that light back at the face of the can. Another flag blocked any reflections from the interior of the studio.

I shot the can with water drops and then started adding ice cubes and also experimented with slush consisting of small irregular crystals sprayed with water. The final shot was chosen from about seven different set ups.

It was a baking hot and humid day. I uploaded the first image to Twitter at about midday on Friday morning. Nothing much happened, a few likes and retweets. I uploaded the final image at about 5:00pm as people were finishing work, and continued grading the rest of the shots. My phone started buzzing, at first a couple of times then with increasing frequency - I picked it up expecting a text message and saw to my surprise that it was notification of likes and retweets from Twitter. Two hours later the two images combined had scored 5.5 thousand hits.

24 hours later the image at the top of this post had received 5.8 thousand impressions and 207 engagements (retweets, likes etc.) The first image received 1,020 impressions and 74 engagements. Bearing in mind the image was tagged #birmingham, and the audience mostly local, that's not a bad return.

So what was all the fuss about?

Could I repeat this? A lot depends on the subject - this was a perfect meeting of beer, brand, hot weather and locality. The principles do bear reuse though, timing and tagging are important and I think if the subject is suitable, that the result could easily be repeated.